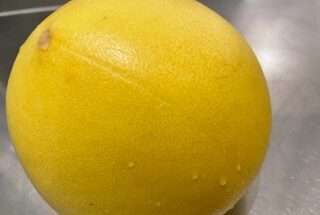 The pomelo fruit was bred in Israel at the start of the 1970s by crossing grapefruit and pomelo. It quickly became a popular citrus fruit in the country, alongside tangerines, oranges, and lemons. After being grown in Israel, South Africa, Southeast Asia, and China, the fruit then named "pomelo" or "honey pomelo" appeared independently on European markets. In a warm and frost-free climate, the evergreen pomelo tree grows up to 15 meters tall. Pomelos weigh between 500 and almost 2000 grams. However, the pear-shaped pomelo's weight is partly attributed to its skin and the underlying white protective layer (or pith), which is up to two centimetres thick. The pith should be removed during preparation because of its bitter substance.