Apple trees are carrying a heavy load at the moment and can be viewed in all their glory – a feast for the eyes. It’s worth stopping for a moment to admire them. Many ripe apples still feature a red, yellow, orange and green glow in several regions of Switzerland. The harvest season begins in August and ends in October.

The apple tree, which comes from the rose family, is now one of the native precious woods. However, it originally came from Central and West Asia. The apple reached northern Europe from Italy during the campaigns of the Romans around 100 BC. Apples were cultivated in Europe as early as the first century AD but remained a “luxury” fruit until modern times. This is demonstrated by both the symbolism attached to them throughout history and their mystical status in fairy tales.

Apples consist of around 85 per cent water (quite the thirst quencher). Despite that, they contain over 30 minerals (including particularly high levels of potassium, calcium, magnesium and iron) as well as trace elements. Equally essential are vitamins such as provitamin A, vitamins B1, B2, B6, E and C, niacin and folic acid. An apple contains 50 to 70 kilocalories (kcal) depending on its size. As well as the numerous vitamins and minerals, another essential ingredient is pectin. This soluble dietary fibre has a positive effect on cholesterol levels, helps bind and flush out harmful substances and can therefore regulate intestinal activity. For that reason, grated apples are a popular home remedy for diarrhoea. Flavonoids and carotenoids can reduce the risk of cancer and protect cells in organisms, while flavonoids in particular have an anti-inflammatory effect.

Apple trees bloom between April and June, depending on the variety. There are thousands of different apple varieties in the world. These differ significantly in taste, consistency and nutritional content.

Apples should be stored in a cool, dry place such as the cellar or garage. Pome fruit continues to ripen. Bananas in particular ripen faster when stored together with apples.

Raw apples make a healthy snack. They taste excellent in a puree or compote. When cut into small pieces, they add that extra something to chicory, white cabbage and fruit salad, particularly when the latter is combined with bananas and stone fruit. There are countless variations of apple pie and strudel. You can also peel, core and halve the apples and fill them with a mixture of ground nuts, raisins and a few drops of fresh orange juice before baking them in the oven.

The relatively old “Cox Orange” apple variety is very tasty. Despite its demanding nature, the tree is still cultivated in many places.

Frowner’s apple sauce made from stored Cox Orange apples that turn a yellow-orange colour over time: 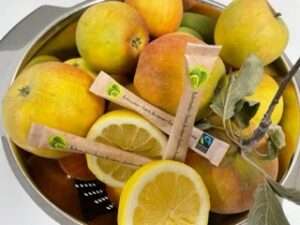 Add a little water and the apples to the pan.

Depending on personal taste, you can sweeten other varieties slightly with a few pinches of raw sugar.

Simmer gently until the apples are soft; add a little more water if necessary. 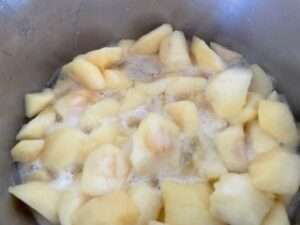 Garnish with washed apple leaves and serve warm or chilled.