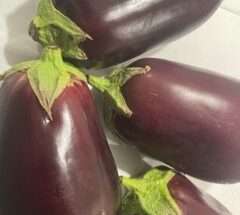 The aubergine was introduced to Spain in the 13th century and subsequently made its way to Italy. The first verifiable examples of it being cultivated can be traced back to China, although this is also suspected to have taken place in India. Because of its bitter taste, the aubergine was first used as an ornamental plant in Europe. Called "devil's egg" by Arabs, the French term "aubergine" became established. "Melanzana" is the name of the vegetable/fruit in Italy, which means "unhealthy fruit". "Eggplant" is what the aubergine is called in parts of the English-speaking world (US, Canada, Australia). This name refers to an old aubergine variety that was the size and colour of a hen's egg.