In contrast to the bitter orange, which came to Europe as early as the Middle Ages, it cannot be definitively proven that oranges were present in Europe before the 15th century. The Portuguese discovered the sweet varieties when travelling to India by sea and distributed them throughout Europe. According to the Food and Agriculture Organization (FAO), 75,458,588 tons of oranges were produced worldwide in 2020. The largest orange producers listed on their scale (as of 2020) were Brazil, India, the People’s Republic of China, the United States, Mexico, Spain, Egypt, Indonesia, Iran and Italy. 6.4 million tons were harvested in Europe. The largest European producers were Spain, Italy and Greece.

The orange belongs to the citrus plant family and comes from China or Southeast Asia, where it was created by crossing a mandarin and a pomelo (incidentally, the pomelo is a species of its own, while grapefruit is a natural cross between an orange and a pomelo).

The evergreen orange trees have a round crown with regular branching, and they grow to a height of up to ten metres. Like many other citrus fruits, orange trees grow fruit even without cross-fertilisation. Orange blossoms are also made into tea that is said to have a calming effect.

In Europe, oranges are harvested from August (early varieties from Seville) to May (late variety from Tardivo di Sanvito, Sardinia). The most prominent orange-based product in global trade is orange juice, which mostly comes from Brazil and is traded in the form of concentrate (syrup). Fresh oranges have also become firmly established in the food industry in numerous countries. Oranges are often sold in an orange wrapper, a practice which used to be carried out for protective purposes but is now used as an advertising tool.

In the Baroque era in Europe, oranges were grown in large tubs for decorative purposes. To take care of them, the authorities set up unique greenhouses (orangeries) that you can still visit in and around castles in Europe.

As this fruit contains vitamin B, it puts you in a good mood – a high quantity of vitamin C helps to prevent oxidative stress and therefore diminishes a risk factor for arteriosclerosis. Oranges boast a high quantity of magnesium and potassium. Sluggish digestion can also be stimulated with oranges.

Vitamins: by consuming just two ripe oranges, you can meet the recommended daily requirement of vitamin C. Vitamins A and E, on the other hand, are only contained in small quantities.

Minerals: potassium is abundant in citrus fruits, but they also contain a notable amount of calcium. When combined with sodium and magnesium, this can have a positive effect on heart muscle function. Potassium is also thought to counteract high blood pressure. Taken together with calcium and phosphorus, which is also contained in oranges, this is said to promote the release of the “happiness hormone” serotonin from the substance tryptophan, which is contained in the body.

Caution: to avoid placing additional strain on the tooth enamel, it is not recommended to clean your teeth directly after consuming oranges. Citrus fruits should be consumed in moderation if you have a sensitive stomach or suffer from heartburn. Wherever possible, organic oranges should be favoured due to the high levels of pesticides used to grow non-organic oranges. These pesticides are unable to bypass the peel and penetrate the pulp. However, some may be transferred when peeling. For that reason, it is beneficial, or even crucial, to wash your hands thoroughly when handling oranges.

Dates – the healthy substitute for sweets

Dates – the healthy substitute for sweets 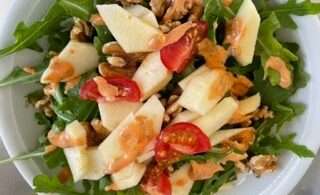