After the kiwi became established in the European fruit markets during the 1970s, its consumption increased almost a hundredfold within ten years. Nevertheless, a well-known gastronomy critic described the kiwi as a “tasteless softie”. Not entirely understandable when you consider the health components but also the careful preparations of the fruit.

The green-brown fruit, first known as the Chinese gooseberry, originally comes from northeast China. The fruit was introduced to New Zealand in 1904 by a teacher who stayed in China. There it became increasingly popular. In 1952, the kiwi variety “Actinidia deliciosa” was exported from New Zealand to England, where it was a big hit. Exports to continental Europe and North America soon began. In 1959, the fruit was called “kiwi” in London, after the bird of the same name, the Kiwi (genus Apteryx), the snipe ostrich. A flightless, nocturnal bird native to the forests of New Zealand, the kiwi is also its national symbol. Its plumage resembles the colour of the kiwi fruit’s peel. Kiwi birds are the smallest among the rarities, including ostriches and emus. (Source: Wikipedia)

Over 4.2 million tonnes of kiwifruit are produced annually throughout the world. China is the world’s largest kiwifruit producer, and Italy comes second, ahead of New Zealand. Other kiwi producing countries are Chile, Greece, France, Turkey, USA, Japan, and Spain.

Kiwis also contain B vitamins, and vitamins E and K, in addition to omega-3 fatty acids and essential fibre and minerals, including iron, potassium, calcium, and magnesium. Kiwis are higher in vitamin C than any other nutrient, with over 40 milligrammes per 100 grammes. It even contains up to 80 milligrammes depending on maturity and variety. Its water content is about 80 per cent, but just one kiwi is already enough to supply an individual’s daily requirement of the essential vitamin C. In addition, kiwis are low in calories and contain hardly any fat.

Known for its brown, hairy skin and bright green flesh, the small, green fruit can now be grown in your garden. The yellow kiwi could be more well-known. The skin of the yellow kiwi is less hairy. Its flesh is juicy, much sweeter, and still rich in vitamins. The yellow kiwi is mainly produced in large quantities in New Zealand and now in Italy.

Kiwi gives the fruit salad that unique flavour. There are different varieties of tarts, cakes, and jam recipes that one can make with kiwifruits.

Frowner’s “vegan kiwi dream” is relatively quick and easy to prepare. Here are the steps:

This low-calorie and readily digestible dessert is almost always a smart choice as a between-meals refreshment!

Apple and mango puree with orange 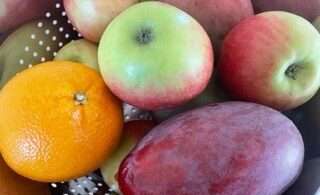 Apple and mango puree with orange

Now the plums are ripe 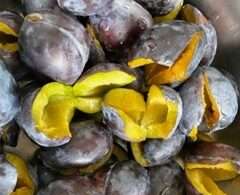 Now the plums are ripe